The park tries to simultaneously encourage and control tourism, since the park’s nature would not resist a massive flow of tourists. Accordingly there are six small camping sites and several hikingtrails are marked, making it relatively easy to find many of the most interesting spots, such as the castros at Castro Laboreiro and Calcedónia and the monastery at Pitões das Júnias. The trail at Mézio as a particular concern in describing some of the local features.

Locations near the few major roads are the most visited. Many of them are related to the strong religiousness of the people in northern Portugal namely the shrines at Senhora da Peneda and São Bento da Porta Aberta. Others, such as Soajo and Lindoso, display small, traditional granaries built of granite, the espigueiros (from the Portuguese espiga, meaning spike).

Two domestic animals also deserve being noted. The Barrosão ox, once used in agriculture, is nowadays endangered because it is losing its utility; as is also the Castro Laboreiro dog, a hunting dog.

The Barrosã race is distinguished from others by its considerable armor, extending almost vertically and lyre-shaped, as well as for its harmonious forms and the flesh of unparalleled characteristics.

Although it must its name to the plateau Barroso, began its expansion in the Minho, where almost replaced the Galician, and even people municipalities such as Maia and Porto.

We are facing a race of dual release, work and meat, the latter undoubtedly a more promising future, with the sale of “Barroso Meat” – DOP, as certified product.

Inserts are mainly in two geographic areas: Minho and Barroso. It can be said that this is a perfectly adapted animal to hill farming areas, where it plays an important role, allowing work on tiny plots, do the same fertilization with manure and optimum use of existing natural food resources that would otherwise be wasted.

The Castro Laboreiro dog has a true devotion and passion for the owner and a remarkable innate distrust of strangers, these characteristics that make it an unquestionable and faithful guardian of people and goods. 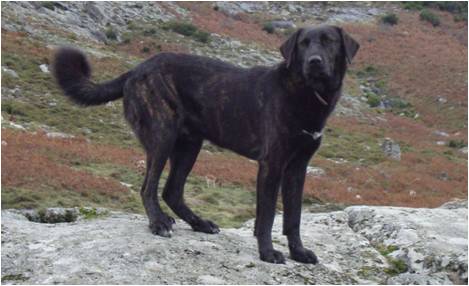 It is an intelligent dog, learning easily. Establishes a strong bond with your family (human or not) who instinctively protects from all dangers. It has a great capacity for protection, which was found for hundreds of years in protecting flocks against all kinds of dangers.
Ever vigilant, thief and alert to possible dangers, approaching and pursuing potential threats if needed.
Humble, does not challenge the owner and is very tolerant of children and their pranks.